"The 'not invented here' hypothesis is the only theory currently consistent with the known facts."

Aspin - Out of Time

A Model for the physical Interactions of UFOs with their Environment

For many years the famous UFO researcher Dr. J. Allen Hynek badgered himself with the question: What explanation could there be for the UFO phenomenon? As an astronomer he was aware of the fact that, at least for humans, it is not possible with our current technical capabilities to bridge the unimaginable distances in space. Hynek, therefore, had the idea to regard UFOs as a space-time singularity and he explained this unusual approach during a MUFON conference in Dayton, Ohio (USA) in 1978:

“Maybe it isn't our psychic energies that cause UFOs to appear, but someone else's psychic energy. Perhaps someone in outer space is projecting their psychic energy and focusing it here, where it then produces the UFO phenomena. No trouble now combining physical trace cases with dematerialization and localization in space and in time. (...) We postulate an extremely advanced civilization somewhere in space, which has as part of its technology an extremely advanced form of our own, but incorporates into its technology what we today loosely call the paranormal, the parapsychological. That is, perhaps a truly advanced technology incorporates ESP, psychokinesis, teleportation, mental telepathy as part of their everyday technology as we incorporate transistors and computers in ours. (...) To such a technology, the idea of building nuts-and-bolts spacecraft and blasting them off from some space Cape Canaveral would seem archaic and childlike. Perhaps all they have to do to get someplace is to think themselves there, projecting a thought form, or a force field to any part of space they want and causing it to manifest there, on that plane.”
(Ninth Annual MUFON UFO Symposium Proceedings, Dayton, Ohio, July 29 & 30, 1978, p.121)

At that time, no one took J. Allen Hynek's fantastic hypothesis seriously. However, over the years, with the repeated demonstration of the incredible properties exhibited by Unidentified Flying Objects, and the emergence of new theoretical and physical models, more and more UFO phenomenon researchers have come to respect Hynek’s foresight.

Even more amazing than J. Allen Hynek's visionary far-sightedness is the fact that, as early as in the 1950s and 60s, a German prodigy developed an extensive physical theory, which already included not only the predictions of the legendary UFO researcher, but which also explained many of the physical interactions observed during UFO encounters: The Unified Quantum Field Theory proposed by the blind, almost deaf and handless physicist Burkhard Heim. 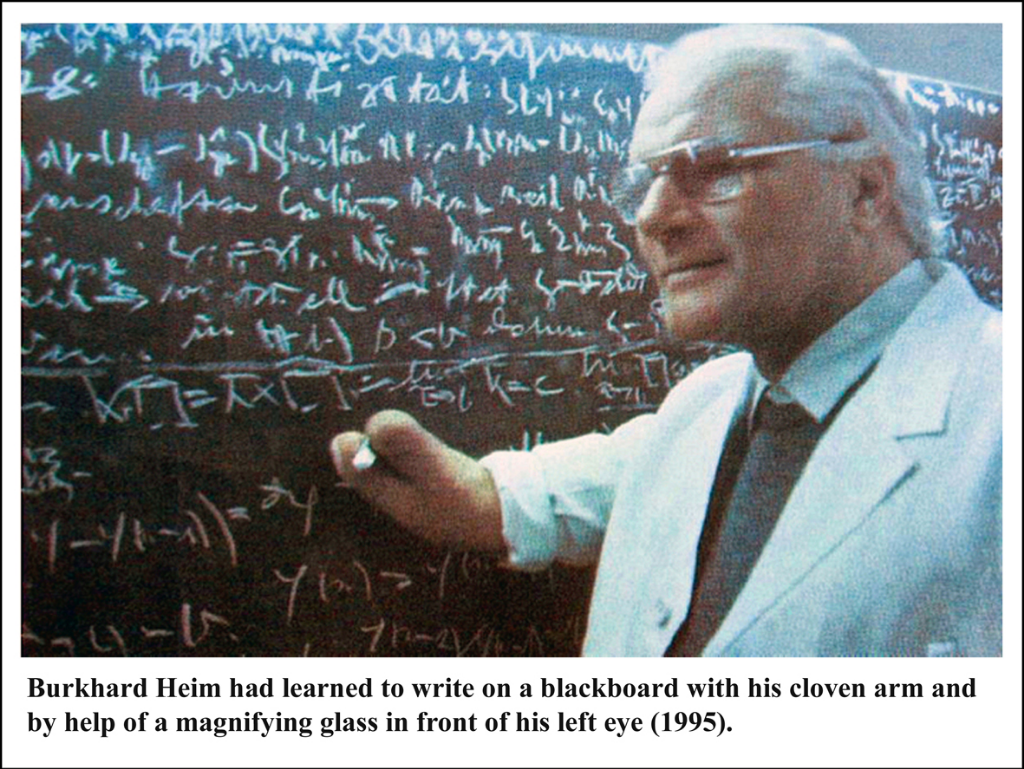 In 1944, while experimenting with explosives, Heim had a very serious accident that almost cost him his life. In the 1950s, he conducted research in Göttingen at the Max Planck Institute for Astrophysics with Professor Carl Friedrich von Weizsäcker, but eventually had to give up his activities there because of his physical handicaps. Burkhard Heim began working on his unified theory of electromagnetic and gravitational fields in private, being supported by his father and his wife.

The physical interactions that UFOs exert on their environment suggest a technology that is able to create and manipulate gravitational fields as predicted by Heim's theory. During some close encounters it was observed that trees were swinging back and forth, as if moved by wind, while the objects were gliding along smoothly in the air above. But, in fact, there was no wind at the time and it was, therefore, suggested that gravitational forces generated by the objects had pushed aside the trees.

From Heim’s research important assumptions can be derived concerning interactions between gravitational and magnetic fields. According to the Contrabaric Effect postulated by him, it should be possible to create a gravitational field, and also according to the Heim-Lorentz-Effect, masses rotating in a strong magnetic field are expected to generate uplift forces that should be able to counteract the gravitational forces of the earth. It is well known from a large number of encounters with disk-shaped objects that they often seem to rotate or at least possess rings or parts that rotate. In addition to stabilizing the flight axis, this rotation could also serve to generate a gravitational field used to drive the objects.

In some cases, UFO witnesses reported cold effects emanating from the objects. Heim's theory also predicts that entropy decreases in the presence of low-frequency gravitational field pulses - thus this kind of radiation has an organizing effect and extracts heat from the surrounding environment. On the other hand, there are also reports of heat effects in the vicinity of the objects, which presumably arise from microwaves.

The so-called 'solid lights' are also observed regularly during UFO sightings and are described by the witnesses as “light rays with very unusual properties”. They can be explained by Heim’s theory to some extent at least. Solid lights were observed to “extend” and “withdraw”, to end in mid-air and even to bend. According to Heim, they can be interpreted as gravitational perturbations: They represent areas in the sky which are gravitationally manipulated and, as a side effect, begin to glow.

The examples above indicate that the Unified Quantum Field Theory opens the possibility of explaining various interactions of UFOs with their environment by the same physical mechanism, namely the emission of gravitational pulses that are capable of creating high-frequency microwaves and low-frequency cold-radiation in the surrounding air. Thus, for the first time, UFO phenomenon researchers have a model at their disposal that allows them to at least basically understand the seemingly physically impossible and magic-like effects observed during UFO encounters.

The unexplained phenomena also include the sudden appearance and disappearance of objects as well as their frequently-observed transparent-like, seemingly 'non-physical' properties. Apart from the three spatial and the one time-like dimensions of space-time, Heim's theory postulates two additional imaginary dimensions, which permit the organization of structures and their temporal realization in space. According to Heim, a geometrical description of elementary particles cannot be successful without these two additional dimensions. In this 6-dimensional hyperspace, so-called activity-streams are in existence in the trans-areas of the world that are normally not tangent to space ('trans' meaning 'beyond space-time'). In cases where they are tangent to space, they would be capable of changing the quantum-statistical probability states of material structures.

There is a 6-dimensional principle of relativity according to which an object can disappear from space to become a 'complex of ideas' or an 'image' once the organizational weighing or 'meaning' of the material object takes place with a certain speed transmitted by activity-streams. The object is no longer present in space, but is instead located in the trans-areas where there are no spatial distances, only structures. In these trans-areas a spatial relocation in the 6-dimensional hyperspace takes place instantaneously through 'structural resonances'.

It will be a future task of physics to detect and generate such activity-streams and to apply them to space technology. If this becomes a reality, it would also be possible to realize Hynek’s suppositions concerning an instantaneous spatial relocation as it already seems to have been achieved elsewhere in the universe.

The English translation of physicist Illobrand von Ludwiger’s book 'Das Neue Weltbild des Physikers Burkhard Heim' ('The New Worldview of the Physicist Burkhard Heim'), which has been available since February 2016, allows Burkhard Heim’s pioneering work to be better known internationally, which will hopefully result in a scientific discussion of his ideas, not only among UFO researchers - but even more importantly - among theoretical physicists.

The English PDF version can be downloaded here:
The new Worldview of the Physicist Burkhard Heim

Below you will find the link to a website about Burkhard Heim containing selected results of his work and also including the final formulation of his mass formula:
Heimsche Theorie - Heim Theory

A deepening text, which deals with the gravitational effects of UFOs and a possible explanation by Heim’s theory, can be found here:

(This text was written in collaboration with Illobrand von Ludwiger during a revision of the website of IGAAP Germany and is published here with his kind permission. Proof-reading and correction of the English version by: Corinna von Ludwiger, Robert Hastings.)